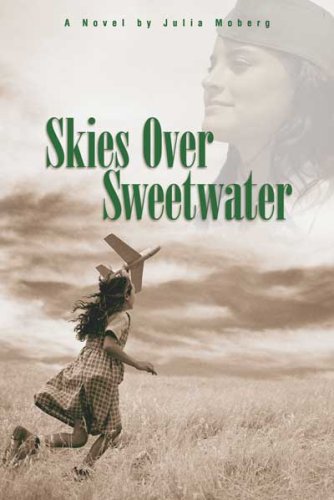 Bernadette Thompson (Byrd to her friends) is 18, the year is 1944, and she is about to fulfill her life-long dream: to become an Air Force pilot. Leaving her poverty-stricken Iowa home, Byrd boards a train en route to Sweetwater, Texas—home of Avenger Field—where the Women Airforce Service Pilots (WASP) training camp teaches women how to fly bombers, pursuits, trainers, and utility planes. At camp, Byrd meets Cornelia the rich girl, Sadie the college girl, and Opal the city girl. Together they struggle to master not only handing a plane, but some of life’s most important challenges.

Praise for Skies Over Sweetwater

“The story is compelling, and it sheds light on a little-known piece of American history. It should serve as an inspiration to anyone who dreams of doing the unconventional.”
—School Library Journal

“Moberg's novel is filled with complex characters, a richly detailed landscape and plenty of action. A stirring read for booklovers of all ages.”
—Midwest Book Review

“My thanks to Julia for writing about the Women Airforce Service Pilots during World War II.”
—Laura Bush, former First Lady of the United States of America

Buy from an online retailer:

Pictures from the WASP Homecoming